Difference between revisions of "Enemies"

From BPM Wiki
Jump to navigation Jump to search

Enemies roam the levels. You must beat all enemies in a room to proceed. Enemies attack to the beat of the music.

In the Weapons page, weapons will show how much damage they do, with the regular pistol dealing 50 damage.

Special enemies that only spawn in certain rooms across all zones.

Every level has a boss guarding the portal to the next level. All bosses except Fafnir and Nidhogg can spawn with a modifier. 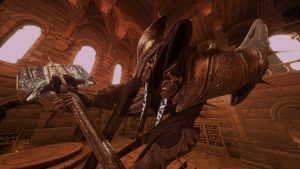 Floor attack. Unlike other floor attacks it is a projectile, and has a limited area of effect.

Charges and knocks the player back, then summons 3 Dragon's Ghosts. 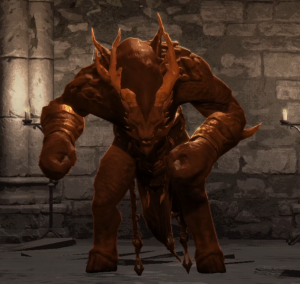 Damaging ripple that increases in size every full-beat once spawned 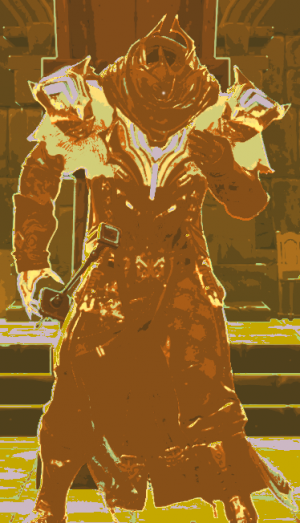 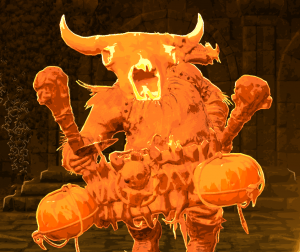 Reaches for his back and then flings a spinning axe.

Quickly throws a spinning axe and then fires a 8 projectile barrage in the cardinal directions around him.

Transforms into a flaming ball of fire and charges the player.

Stops moving, readies his clubs, and then claps them together spawning a damaging orb. It moves linearly while slightly expanding before eventually phasing through the arena

Stops moving, and readies his clubs which glow before attacking with a flurry of axes. These travel in a quick spread in the direction he is facing

Stops moving and then slams the ground, causing a damaging ripple that increases in size every full-beat once spawned (eventually dissipates)

Stops moving to prepare a circle (safe-zone) and then attacks twice. 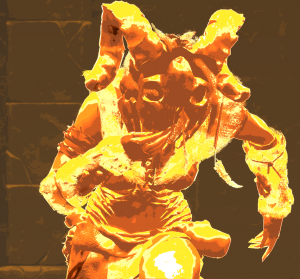 Individually fires 5 daggers towards the player on every full-beat.

Fires 4 daggers towards the player at once that travel in a spread.

Attacks the ground causing it to damage the player.

Kneels and initiates an aerial attack.

Places a dagger in front of her which spawns a cross that can move clockwise or counter-clockwise around the arena 4 times before dissipating. 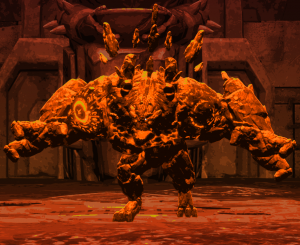 Rapidly throws a small rock towards the player.

Grabs a huge rock from the ground and throws it towards the player.

Crouches, then fires 8 fireballs round him.

Smashes his fists onto the ground, creating 2 homing shockwaves.

Jumps in the air smashing his fists onto the ground, creating a big explosion.

Stands back and inhales, then spits a barrage of fireballs in a cone in front of him. 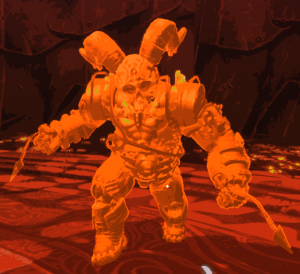 Throws a single projectile towards the player.

Launches three large, semicircle slashes at the player one at a time on each beat, at varying angles.

Thrusts his whips into the ground, one on each beat, and performs a ground attack.

Hits the ground that creates a straight line that lingers on the ground for a short time.

Mistcalf pulls the player toward itself. Does no damage.

Charges up for three half beats and releases a flurry of projectiles towards the player. 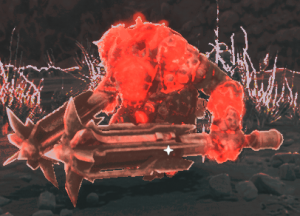 Hits clubs together, creating an expanding hemisphere that will damage the player if touched.

Charges the player with a fiery outline and swings clubs at the end of charge, then swings again one beat after.

Once taken down to 50% HP, Surt with grow and lose the clubs. After this point Surt will throw quick projectiles at the player on every beat.

Hits hands together to create an expanding hemisphere.

Spawns a fireball projectile from their mouth

The final boss Nidhogg will only aggro the player after three rounds of fights which can be triggered via the lever on the ground, similar to a challenge room.

Launches a fast fireball at the player with a crosshair dodge warning.

Creates and expanding sphere that grows in size every other beat.

Launches 6 projectiles on half beats at player

Second Phase: Nidhogg lands on the ground and faces the player

Launches six sets of three projectiles on half beats at the player.

Launches a fireball at the player with a crosshair dodge warning.