Altars are points of interest that can appear within rooms, most of them granting the player some kind of boon when interacted with. The two main kinds are chests and shrines.

Altars appear in most normal rooms, excluding the spawn room on each level. One variant of

Huginn's shop (in Asgard I) has a secret shrine. Most rooms spawn with a shrine of some kind, but their appearance is not guaranteed. Once exhausted (which may take multiple inputs), shrines cannot be used again, and will usually glow with a pale fire or a halo to indicate they've been used. Only one shrine of each type will spawn in a given room, but rooms can spawn with multiple types of shrines. Shrines, especially secondary rarer shrines, can be located in hard to access places, usually high up on balconies or ledges. While some of these shrines can be reached via creatively jumping from rails, banisters, mushrooms, etc. having a mobility buff like flying, triple jump, super jump, rocket jump, grenade jump, the Space modifier or super speed can help. Some shrines may be impossible to reach with the player's current equipment and stats. Shrines typically behave the same way given their type, but the player's Luck stat can induce other, better outcomes, even from basic shrines.

These altars take the form of large statues with urns, and will accept a random number between 1 and 6 of coins (for the Angel) or keys (for the Devil) in exchange for a random result. The random results include:

Angel and devil altars cannot produce every possible item, book or scroll in the game, but rather each can only produce results from a limited loot table. Devil altars tend to produce higher quality rewards, with the notable exception being

Seiðr's Blessing, which in turn spawns only from angel altars.

These are the most common altars, and take the form of statues with small offering bowls. They are easily accessible and usually appear along the peripheral walls of the room. They will accept a single coin

in exchange for a +1 boost to the character's stat, dependent on the statue. Often times blessing altars can be difficult to spot; they tend to blend into their surroundings, both in color and in geometry. Scanning the peripheral walls of the room is a good start.

This shrine resembles a small pillar with a fiery sword above and one of 3 possible items (listed below). Activating it deals 25 damage (12.5 on Practice, and 50 on Hellish) to the player, in exchange for whatever is resting on the pillar. The damage can be reduced or avoided with abilities and items like

Valkyrie's Veil, which will negate the damage completely, or

Skjaldmeyjar's Plate which will reduce the damage. Possible items are: 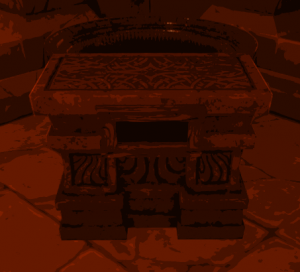 These take the form of small, square chests with a slot in the front into which a coin is inserted. Upon inserting a coin a random outcome will occur:

In addition to a previous effect, the machine can jam. The coin will remain in the slot and no further input will be accepted.

Slot machines can be found as a bonus altar in a normal room[verification needed • edit • ?], or in their own special room marked on the map.

Located in the right room of Helheim II. After depositing 100

Giant Slayer Boots will appear. All subsequent runs will spawn the boots.

Located in the special Tribute room, marked on the map, that can only be found in Asgard Crypts. Can accept up to 50 coins one at a time. Each time it accepts a coin, it tries to increase a random stat by 1. If the stat it tries to increase is already maxed, it will increase the clip size by 1 instead.

Located in the special Prestige room, marked on the map, that can only be found in Vanaheim I. Will accept 30 coins (paid at once), after which it will turn all player's currently equipped items into enchantments (they will provide their full effect but without taking a slot). Price is unaffected by number or currently equipped items and cannot be discounted with

Barter. Items with activations will not work anymore.

There are 10 Trial Altars that can make the game harder. If playing a character you already completed the game with, four of them (chosen randomly) spawn in the start room in Asgard I and can optionally be activated by the player.